...........She glanced down at her feet as she reached the shed entrance. She thought briefly about the nails and wood shavings scattered across the floor of the shed, but a long plank of wood was lying to the side, clear of any shavings. It took her close enough to the hook where the rope was hanging.

She flicked and wriggled the rope free, thinking of how the same rope had been used to tie the dead goat up last week from the big tree. Remembering how the gut was slit open and all the warm insides spilled in to the wheelbarrow. She had held the heart and kidneys in her hands like jewels of the earth. Everything was attached by veins and sinew to the next organ. A trail of connection. Everything is connected she thought. This was what was in us all she had realized. She had ran her hands along the intestines, feeling the heat and smoothness. The thick grassy scent coming back to her now makes her lean in and smell the rope. Just a hint of the goat smell. Not enough to bother her. 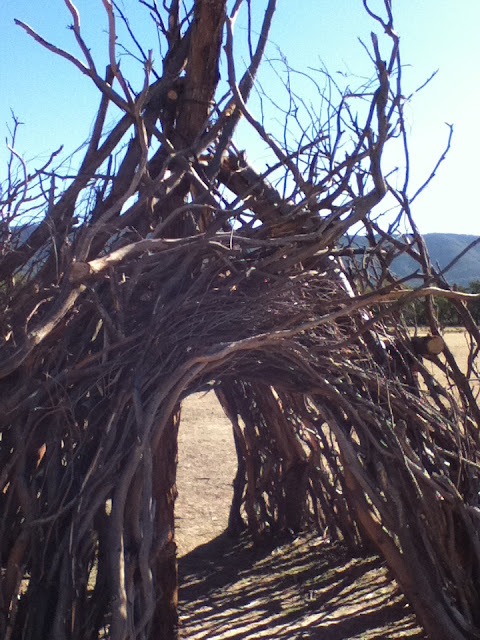 She climbed back up the bank along the path to the curved tree she had noticed before. It was bent so far over that it almost touched the ground. Climbing and sliding across the top she ties one end around the trunk and then let it drop holding on to the other end. Hoisting it to the right height she tied it again.

She had tried to make it into a proper swing. A plank of wood with holes each end would be needed, but that would mean cutting the rope and she new that wasn't an option. If she wanted a proper one it would have to involve her brother or father. So she decided to leave it.

She climbed into the hanging rope and had sat dangling her legs with her thighs squished in feeling unsatisfied. But knew she would adapt it into something else, everything is changeable she thought. She had been staring down the mountain when she heard her name called. "Beckaaa Beckaaa, ...... Becka!"

"Coming" She called. Running down another steep path to the house she remembers her sandals sitting on the rock back near the tree. But she was flying now, it was too late, the momentum pushed her along and her tummy was skipping with delight. Her strong legs jumping over ditches and landing with the most stunning perfection..... She didn't even feel the scratchy bracken on her legs or the prickles to her arms.

Because she was flying.