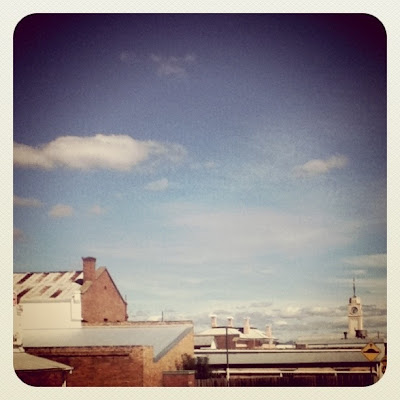 God I still hate this town.

How is it that I feel this way. I mean it's just a town, with a clock that chimes every hour. A town that's success, is all to do with the chipping away of rock for gold. I suppose it's not the place, it's the culture. It has elements of good streaks, I guess. But mentality, has large factors of it's well-being. I see faces and people, I know of them. Can't put names to them, but they are all bred from this town. I am not, I have never lived here but was schooled here. Noooooo I was from 25 clicks down the road and up the side of a mountain. I am not recognizable  to any one. I left a long time ago and never came back. Until recently.

I have stopped to get a soda water from a cafe today, to prevent myself from loitering at the second hand bookstore/op shop, come old persons hangout. I like to hang with the old people. They are easy and nice, and they know alot. Mana is at her kinder arvo and this is when I do the weekly shop, whilst in town.

I am sitting in the window seat looking out... My neck is so tight today, and my right eyes is swollen from dry eye. But, a more common occurrence is threatening me right now. I am taken by a feeling....... They sometimes come in the middle of the night. In the dark, sometimes while I am asleep, how the fuck does that happen. I mean, I am ASLEEP!..... Very occasionally they come to me in the stark light of day. Like today. I am not even worried about anything. But it's like, the world is going to swallow me up and I won't be able to breathe, ever again.

They are the scariest things I have ever faced. I keep telling Wayne I have control of them, that I don't let them get away on me. Truth is, I don't know what the hell I am doing, only that if I go and see someone about it, i feel it will make it bigger and stronger somehow. And right now, I can manage them. I have always erred on the side of very mild claustrophobic tendencies, but thats not it.

Here's something I wrote a while ago. Last year I believe.

My first was 4 years ago when I was pregnant with my daughter. I was fast asleep and woke up with a start, I felt I could not breath and had to run down to the living area and turn on all the lights. It felt like the dark was going to suffocate me. Even then, I almost felt the light was not enough. 2 years later another one just the same. Then a few months ago another one. Then a few more. It's so scary. A month ago I walked into the cinema a bit late with my family, it was dark already and the screen went black for a moment, I literally flew out of there, clambering over people to get out. 5 mins later I went back in and relaxed and kept my eye on the lights on the step and was ok. I felt sick for days though. It was such an unconscious thing. I never saw it coming. I have not had one since, although some times in the day I feel like I am going to get swallowed up by darkness. But then it's gone. I have never been afraid of the dark. Maybe a little claustrophobic, but nothing serious, I am not sure what this is. But I don't like it, it feels like it could control my life in those minutes. It floors me every time cause I just don't see it coming.

I have had the feeling a few times since. Only slight ones. Honest.

It's time to go and do the grocery shopping now. Thank Christ.

Heres my little hang out.

SHHHHHH......don't say the word out loud I know they are AAs. I just don't know why.

I should be posting about all the glorious produce we have, and Wayne's wonderful recent metal works...... But the mind works in mysterious ways. I will get to those too. when my head is cleared of some of this.

I should change the heading to " a scattered life". ha!

P.S. I don't really hate the town, cause you know....Hates a very strong word...... (Hey Cassie and Luca..). It's growing on me a tad...like that side street. Thats pretty cool. A little oasis, amongst the crap.