Does anyone else out there miss their Grandparents?

Well, I miss mine.

My Grandpa died when I was 3 and when he was 68. I remember riding up beside him in his blue combie van, the chuffed youngest grandchild. Sitting on his lap in a rocking chair having a story, a real story...not a book story. He was so warm and encompassing. He had been a teacher,  a manager of a boys farm, a believer then an ex believer, a member of the UFO society of arizona, a storyteller and a father of four girls. ( and except for my mother, the other 3 daughters married boys from the boys farm..... hilarious, don't you think!)

The eldest of these daughters was a true believer and still is, and rather self orientated on this issue. The second eldest, is a piano teacher and kinesiologist. The third daughter was a teacher, is a swami, and has been most of her life. The fourth daughter was a teacher too, a counsellor and art therapist ( my mother. yes my mum's a therapist......)

I was told my Grandpa died of a heart attack in his sleep, but in actual fact not that long ago I discovered he actually refused intervention and was wide awake when he had a heart attack.

My Grandma died around 30 years later at the age of 94. Almost every day she said.....'Blast it......, wish I would hurry and move on so I could join Bill!' But in those years she waited to join my Grandpa she conducted orchestras, ran Gilbert and Sullivans, chopped her own wood, played bowls on Wednesdays, book club Tuesdays, choir practice Thursday nights, and the midday show with Ray Martin everyday. And a milky-way chocolate in the fridge for me always. 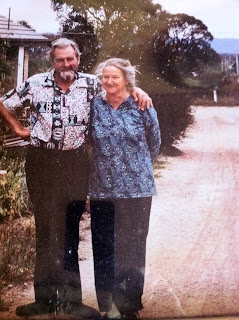 On my fathers side was my Nanna and Bunty ( everyone called him this). My Nanna died when I was 15, a stroke while emptying the dishwasher. She was a spic and span cleaner, a cook, a water color painter and a 5'o'clock beer drinker everyday. She used to brush my ratty her and spray it with her stiff hairspray. I adored going on holidays to their house. It was perfectly 1950s, full of gem stones and had a peanola! Across the road out the side gate lived my Nanna's sister, auntie Nell and uncle Jack! Up the other side and across the road was Bunty's brother, uncle Digger and auntie Eta ( unreal names hey!)
My Dad was an only child....It explains alot! He was a Graphic designer, then art teacher,.......and now he is a counsellor too.....mmmmmm!


Bunty died at 89 when I was 30, he was still living at home, where he wanted to be, untill not long before he passed away. He was the gem stone collector, builder and timber mill owner, driver of a chevy impala and a 1961 black mercedes that stayed in the garage and came out for special drives. Now it sits in Mum and Dads shed an occasionally comes out.


He was a contained man, kind, gentle and quite. Actually I dont think I ever heard him speak until my Nanna Passed away, and boy, then did he make up for it, you could get stuck listening to his stories for hours and hours! ("By Jingo, when we went fishing at glenn maggie weir......" ).When Nanna was alive she was always saying "Shut up Cliff...no-one wants to hear that story" 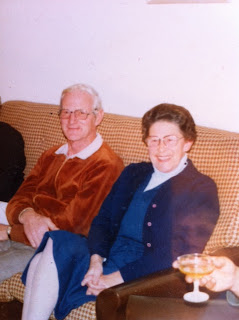 But you know, I like stories and I loved the way my elders told stories...

Did your grandparents tell stories too?