We watched 'where the wild things are' on the weekend with Jonah. I had thought it might be a little full on for him but I didn't realize how sorrowful it was going to be and that the last 15 minutes were going to have us all bawling with it's rather intense sadness.

So after it finishes, when we finally clear away the tears Jonah picks the DVD case up and says "I don't know why it's says it has";

"But it does not say anything about it being"

And once again... Wayne and I are in awe of this beautiful young boy that teaches us again and again...what it is to be so caring and tender to all around him.( God.. I hope it lasts when he hits his teens...)

He's right too, the emotion of sadness can be much more powerful than coarse language, scary scenes and mild violence. Being sad is something they neglect to tell you, or warn you about.....when allowing kids to watch films or shows...Maybe I am glad they don't as we all need to remember to feel sad, although do we burden our kids with too much by not monitoring it the same as violence etc....mmmmmm?

Media is such a strong influence that we ignore at times and I do wonder the effect it has on our children. More so when left unchecked.

Anyway, when Jonah was little he was not partial to Joking, at all in fact, and he used to say " I don't like goats".

So its only fitting his favorite character in the movie was the Goat....and if you have seen the film you will know why.... 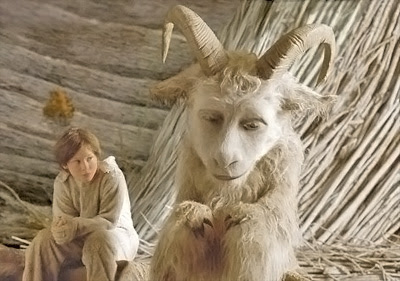 Jonah has said this is the best film he has ever seen.
but  he says its a one off film, its not really one you would watch again......
mmmmm.....self preservation...?

Ps...This movie had some awesome creations in it...amazing set designs and costumes!
Posted by rex at Monday, June 06, 2011