“Overcoming poverty is not a gesture of charity. It is an act of justice."

“ It is the protection of a fundamental human right, the right to dignity and a decent life. While poverty persists, there is no true freedom.”
Nelson Mandela

Once, I spent some time on the boarder of Zimbabwe and Zambia. It was a long time ago. The place was drenched in AIDS. Women and babies dying. Children with no hope in their eyes. It was a prostitution, shanty village. Truck stop, boarder town. It was on the majestic Zambezi river. We were staying in a lovely thatched house that overlooked the scenic view of the river and a plunge pool to laze in. Whilst behind us, sat the silent, horrendous despair.

Of course it broke my fucking heart. But that's not the point. My helpless sad reaction was a waste of time. I thought I would of been doing something by now, just anything, to help. I mean really help.

Once, I was with Wayne's mother, when we were in Zimbabwe. She kinda snuck/took medicine to a lady, that could not afford to buy it herself. Well..... I am assuming this because she never told me anything. I just tagged along to these random drop offs. She used to pay for the groceries for all her workers, which was two full time gardeners and Amos, the house cook cleaner, tea maker, servant, help......what is the correct tittle of some one in such a job?. She paid school costs and medical needs for all of their children. She was not into fancy cars or fancy clothes, and that women, had the best set of loyal eccentric friends anyone could ever have. She new what mattered.

When she passed away at  the age of 58, after emphysema took her, Wayne's father was shocked to find she paid for such things, he never ever new. She earnt money by sewing, flower arranging and gardening. She was given house keeping money each week. All of that, was how she paid for those things. On the day of her funeral, there were so many pews filled with black people, and still Wayne's father could not work out who they all were.

They came together, cried together and left together.


She ment a lot to them, all the little things she did. It made a difference.

There is so much more to this story, but I can't write it all here. The crux is that the little things you do for people, make big differences to those you can help. So that matters. Alot.


Here is a story I wrote early last year after a holiday in South Africa.


The story of a Lion, a boy and his tears. 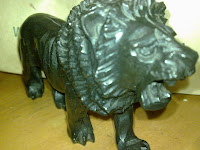 One of our last days left in South Africa was spent in Franschhoek, a town of craft, art, food and despair. We sat at a cafe having a cool drink and lunch. My eyes drifted to across the road where the curio stands were lined in their designated rows. I watched as the men at each stand quietly scanned the occasional tourist walking past and then moved forward to offer their art and goods.

Mana was restless and we all seemed a little unreasonable and testy this particular day, as we knew our time here was almost over. So I said to Jonah 'you have a little money left let's go and choose a curio.' Mana hopped in her stroller and we left Wayne and Luca to enjoy some last moments together of what time we had left in Africa.

We crossed the street to walk along the stalls, by the second one we were ready to take a closer look, we had a chat with the man about his stone carvings and established he was from zimbabwe like so many seem to be... Jonah was eyeing a lovely carved lion, we had been to a lion sanctuary the day before where the lions had roared into our soul with such a depth that had made our legs turn to jelly.... Anyway he decided on the lion and the man keenly and gently folded it in bubble wrap and recycled brown crinkly paper.


We decided to walk to the end of the stalls for more of a look and me repeating as I went "just looking thanks" to each of the stall holders as they approached us with their slightly pleading eyes. And me, as the adult averting my eyes from practice, knowing how persistent some sellers can be, but these guys were o.k. and backed away a little dejected, to give us space....

As we turned to walk back Jonah was a few steps ahead and I noticed one of the stall holders looking at him with a slight frown and then he said to Jonah  " Its alright my boy, no need to cry, its all good".......  I thought maybe he just looked weary, but then as I quickened my pace to reach him and he angled his head down even further as I tried to peer at his face under his cap........I knew he was crying...........and I knew why those tears slid down his little cheeks as he tried to wipe them away...but I still asked " what's the matter Jonah?".... He said in the quietest voice  "We can't buy from them all can we mum" and what he really meant was... we cant help them all...can we mum......my heart fell to the ground at his utter sadness.

I put my arm around him and we sat down on the curb and as the tears welled in my own eyes  I said.." Its ok"...though I knew it was far from ok.... " they are fine, lots of people buy from them ... see look there's another man buying something over there and look at the kids playing behind the stalls ...their happy Jonah" and they were for now, a father sat with a little toddler and played a game with a plastic bottle ......... But I knew Jonah could see through all that,  he saw to their own despair, their displacement, desperation and despondency.

He had seen lots of things on this trip.........miles and miles of shanty houses, women eating out of garbage bins, people begging for help on the streets, lost people, hurt people, hungry people, angry people and barely alive people....oh yeah he had seen lots..

I hope they knew what the tears were for as they watched us talk and us looking back at them, and me trying to explain to a 10 year old the poverty of this world...the madness of this world.

I hope they knew those tears were for them....

ALWAYS, THERE WILL BE MORE YOU CAN DO.

So in conclusion, I think compassion is greatness, and I think all the little things matter. So even when I buy that oxfam fair trade coffee every week without fail, I am helping, and every time any of you donate or do something that is considered little, it is actually bringing change. It shifts the proportion of wealth and health to others that need it. There are so many people doing positive acts to help and change the poverty of our people and planet.

Sometimes you think nothing you will do will help. But it does. All the little things you do are of great importance, and below is 4 buttons you can press and help, not for your own gain, not even to make yourself feel better, just because you believe in a good and fair world. You do believe that, don't you? I know you do.

It's not just in Africa or Asia either, this great need for
help. It's in Australia too.